While theme vacations are typically so not my thing, a trip to relive the classic 80’s film The Goonies totally is!  Plus, as a grownup, I get to do the Truffle Shuffle while legally  downing one of Oregon’s craft beers. Just saying!

You can find the original post from CookingforBello below. Since it was written for family and friends, I thought a quicker recap might work better for fellow travelers.

If you’re as big a Goonie as we are, our hope is that this blog serves as your treasure map for a 3 Day Trip through memory lane.

Don’t forget to pack a Baby Ruth, a copy of or way to streamThe Goonies and a rain coat, chances are good, you’ll want them all.

Start by looking for a hotel in Cannon Beach Oregon. We’re fans of  The Cannon Beach Hotel personally but any hotel along the beach will put you in walking distance of your first stop.

Start at Haystack Rock in Cannon Beach. Even after you relive the scene where Mikey holds up a coin to this very rock, there is plenty to do and see.

At over 230 feet tall you can walk right up to Haystack at low tide. Puffins and ocean creatures dwell around it, playing in the longest, slowest rolling waves I’ve ever seen. It’s a playful combination of Goonies nostalgia and nature that invites you to walk and snap pictures for hours. Which we did, on two separate days. Cannon Beach is that beautiful and in September this empty. 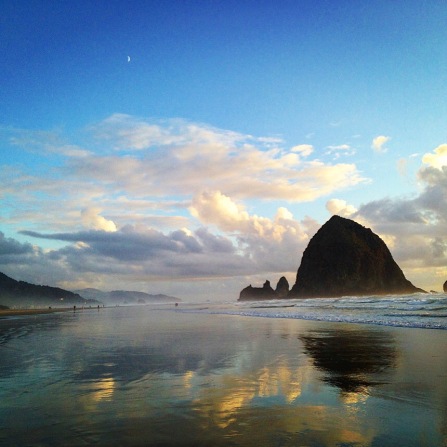 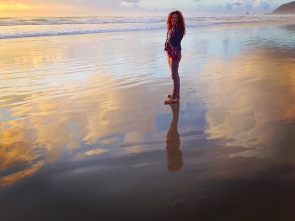 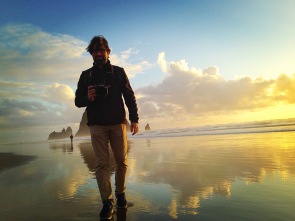 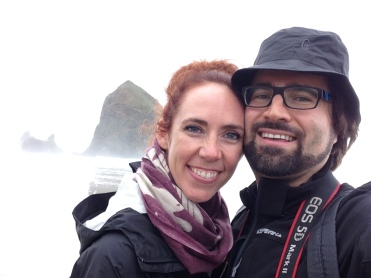 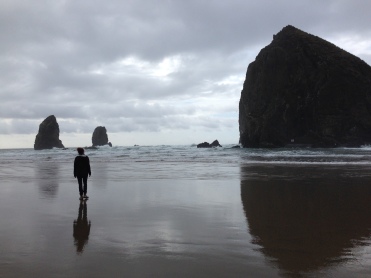 Where to Eat & Drink:

Oregon is Beervana, Beertopia, BEERADICE. While here, you owe it to yourself to try a few of the locally crafted options on tap at the Brew & Screw. It might look like a hardware store but don’t be fooled!

Before you pull up a stool, check with The Irish Table next door to get your name on the list. This low-lit romantic spot serves hearty Irish comfort food that is oh so welcome against the inevitable Oregon rain.

Just want a brew with a great beach view? Try Mo’s Chowder. While the food is nothing a Foodie would write home about, the view of Haystacks rocks delivers Goonie Magic worth the stop.

Woke up with Goonies on the brain? GOOD! You’re not far from Ecola State Park where The Goonies rode their bikes through the rain. Unfortunate name aside, this park is an absolute outdoor-lovers gem.

With hiking trails shaded by tall trees, beaches with rocky shores and elevated views, it is somewhere to write home about. 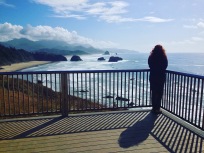 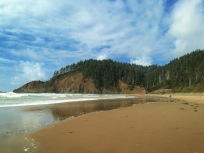 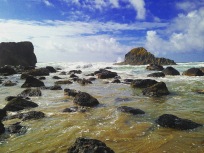 It’s easy to hike the day away in Ecola but make sure to carve out a little time to head back to Cannon Beach’s main drag. There are a lot of amazing galleries but don’t miss Archimedes if you want something more hip, edgy and modern. The Jeffrey Hull Gallery houses classic painting that reflects a love of Cannon Beach, aka the grown up Goonie Lovers Art.

Warm up after the rain away with coffee from Insomnia. When it’s time for a meal throw yourself a picnic with a bottle from The Wine Shack and fresh seafood from Ecola Seafood Restaurant & Market. If you’re lucky a local might even share their beach bonfire with you!

Today, you go to jail. So get up early, you’re headed to Astoria Oregon to see the neighborhood where Data zipped to Mikey’s house. Mike’s house itself, his Dad’s office and oh yeah the jail the Fratellis were held!

First stop: Set your Google Map to the Astoria Column on Coxcomb Hill. As the highest point in Astoria, it’s the best view to take in the fact, that you’re in Goonie territory now! From here, make your way to Mikey’s House, where it all began.

On a serious note, the address is 368 38th St Astoria, Oregon 97103 and it’s actually someone’s house now. Don’t be a dork and ruin it for other Goonies by doing anything stupid.

Next up, drive on over to Mikey’s Dad’s office at The Flavel House. Now a museum, this Queen Anne-style Victorian mansion’s lush grounds are perfect for a Goonie Selfie. It’s also walking distance to the Oregon Film Museum aka Clatsop County Jail where Jake Fratelli busted out. 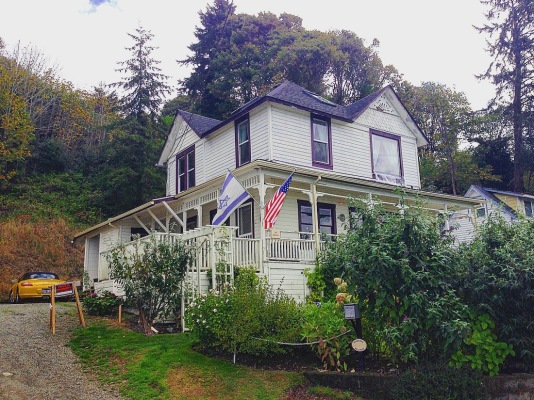 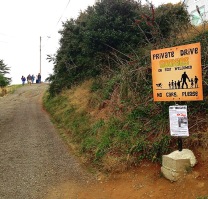 Don’t Be a Dork 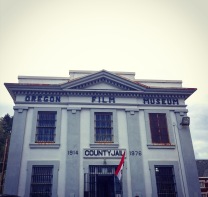 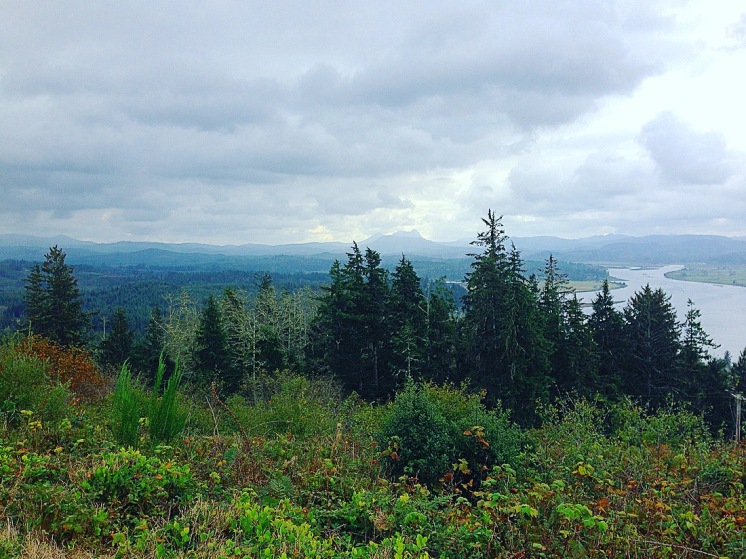 After your Baby Ruth got you through the day, it’s time for a proper, beer and burritos pairing at Fort George Brewery. Huge local followings are always a good sign and so are loads of beers on tap!

After lunch head over to the Columbia River shoreline. It might not be where the treasure ship sailed, but it’s a great way to walk off that huge burritos and beer buzz before you drive back. 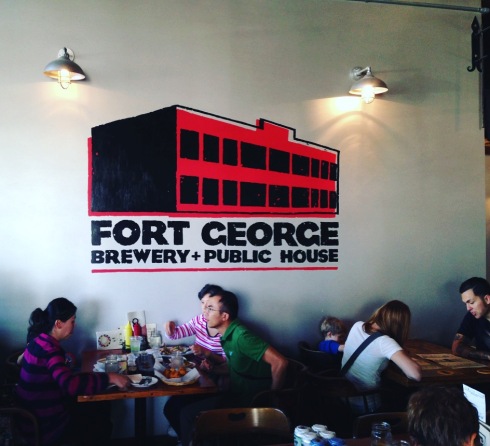 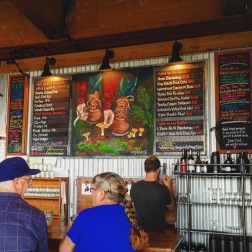 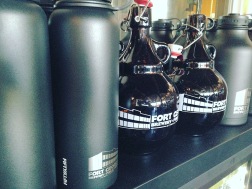 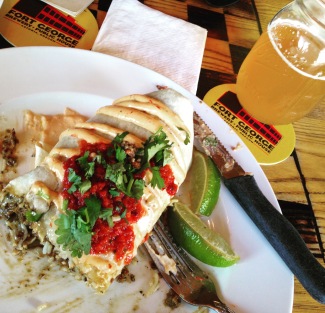 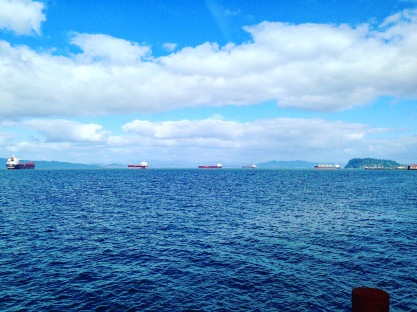 Now what better way to close out your Goonies trip, then to take a little of Fort George Brewery’s finest to go? Head back to the hotel, light a fire and watch The Goonies.

You get the delight of watching a movie that has held up over time (yes, it’s as good as you remember) combined with the fun of saying “I was just there!”

To all the Goonies out there, these clues to the perfect 3 Day Goonie Trip are for you.

On a recent trip, I learned something new about my Husband… he’s a Big ‘Ol Goonies Fan! While strolling Cannon Beach in Oregon a few days before driving into Portland, he turned to me with a look I thought I knew well. I was expecting a romantic turn of phrase like “I swim in your eyes.” Yes Italian men DO say such lovely things and yes it does make this midwest kid swoon. This time he really surprised me though, saying “do you remember that scene in the Goonies, where he lined up the rocks with the coin, look!”

On no trip before, has he been so adorably geeky to me. Typically, while walking on beaches, he soaks up the nature, takes photos for hours and I silently fill up my eyes. On this trip we walked on water and relived our childhood.

We both remembered a startling amount…

To Travel is to Live

They're more interesting than you think.

My Girls On Tour

The World according to Dina

Notes on Seeing, Reading & Writing, Living & Loving in The North

Art of Living On the Road

Blog about Mexico's Must Have Seen

An average guy's take on wine and movies

tales from a life abroad.

In The Kitchen With Gianna Trzesniewski

Simple recipes that create a "WOW" factor for the people sitting next to you at the dinner table.

Hacking life while enjoying everything in between

A blog for pescatarians
Travelling with Lyn

My experiences in Italy and the world