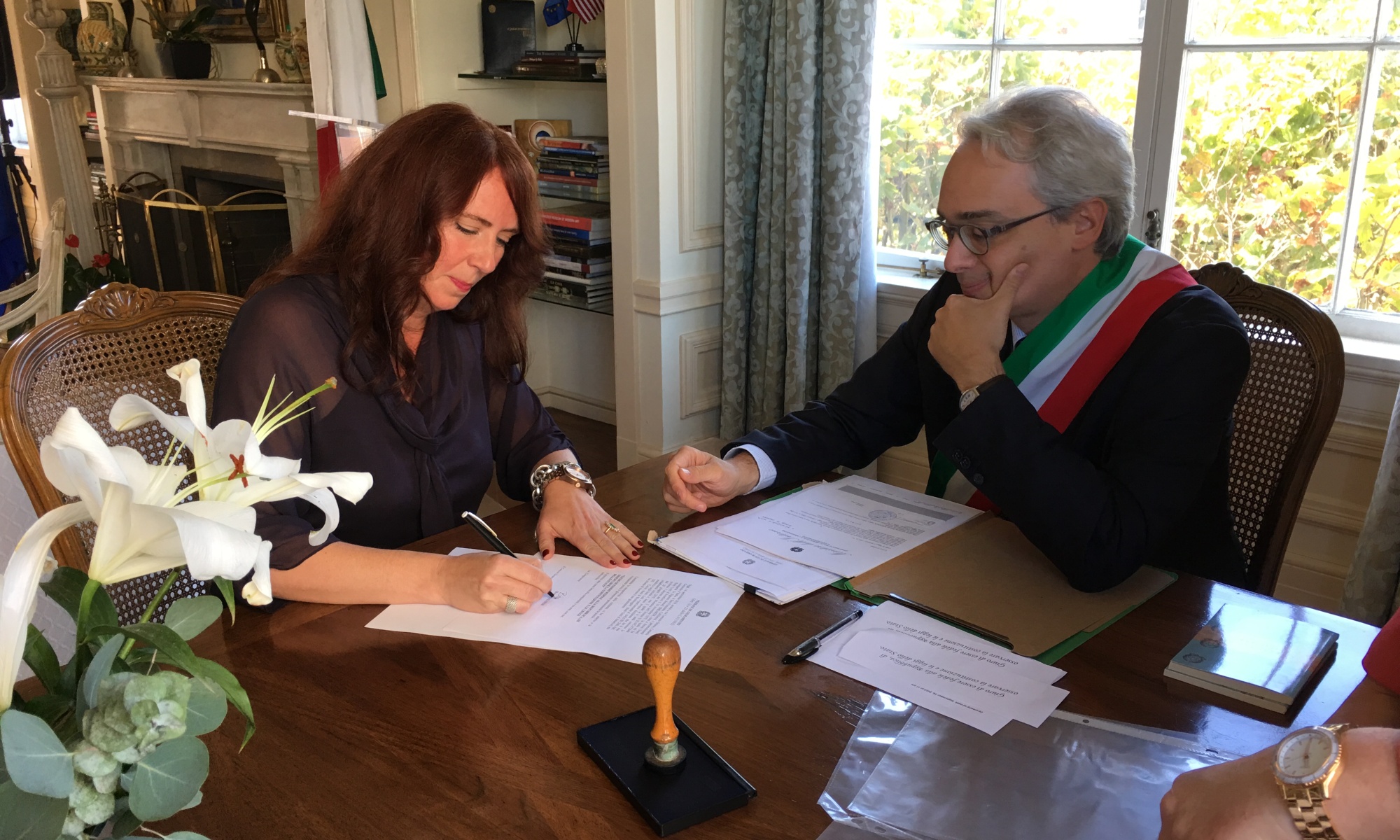 On September 16, 2019 in a small ceremony at the Italian Consulate in San Francisco, I took an oath to become an Italian citizen. Paolo was right there with me, taking this video.

Oath to Become an Italian Citizen

In case you don’t speak Italian, here’s the oath that I took to become an Italian Citizen.

“I swear to be faithful to the Republic and to observe the Constitution and the laws of the State.”

Citizenship ceremonies come with an overwhelming mix of emotions tempered by preparation, bolstered by pride. Looking back at the video, I see my nerves give way to relief. The gravity of the moment give way to jubilation and my hair give in to frizz.

The moments before, during and after a citizenship oath feel significant in the moment, and those moments in life are rare. In the moment I took my Italian citizenship oath, I felt acutely aware of everything. Of each of the nine people in attendance. Of the three other nervous people about to take their oath. Aware of the bright California sunlight bouncing off soft cream walls. Of San Francisco Bay outside the window, rooting me in a sense of place.

Before my Citizenship Ceremony began, the room was quiet. Pre-ceremony words were spoken in hushed tones. At the end my floodgates opened and out poured six years of bottled up fear, frustration, joy and freedom.

How Long Does It Take to Become a Citizen?

Paolo and I were married August 22, 2013. In both our cases, we applied for dual citizenship the very day we were able. It took us until till December, 2017 and September, 2019 respectively to become citizens. Every day for six years right after breakfast Paolo would fire up his computer and check his immigration status and then mine.

The Process to Become an Italian Citizen Has Always Been Arduous

Once Paolo and I registered our marriage in Italy, we had to wait two full years before I could start the application process to become an Italian citizen. The day of our two year anniversary, Paolo and I submitted my application for citizenship. This is when the real work began.

I had to get finger print background checks in every state I’ve lived in (gulp) along with an FBI fingerprint background check. I call out fingerprint for a reason. These all had to be completed within six months of the application. While that doesn’t sound like a big deal, I quickly discovered I’d missed my calling as a cat burglar. My finger prints came back as unreadable four times.

Each time, I re-inked at the local Sheriff’s office, mailed the fingerprint card to the state doing the background check and waited. Were my finger prints accepted? How long would it take this time? The clock was always ticking. It took nearly four months to get them all complete.

Once we got all the fingerprint background checks completed, they had to be apostilled, translated into Italian and the translation had to be approved by the Italian Consulate. Once we got everything in and citizenship fees paid, the wait began. The Italian government now had two years to process my application.

Everyday for the next two years, Paolo checked my application status along with his American citizenship application. We watched as the applications moved at a snails pace through each phases. In my case, we were close, so close to the end when a big hitch came. Salvini’s anti-migrant security decree was signed into effect.

In the last leg of my application for Italian Citizenship, the newly elected interior minister Matteo Salvini, leader of the far-right league swooped in with a bill that abolished humanitarian protections and intentionally complicated the path to citizenship. Now becoming an Italian citizen was nearly impossible for the vast majority of citizenship applicants, including mine. Here’s why.

New requirements included raised fees, two additional years added to the citizenship process, passing an Italian language exam with at least a B1 level of proficiency and a squeaky clean criminal record that had to be re-demonstrated before the official oath ceremony. For months we were waiting on pins and needles to receive government clarification. Did the new bill include applications in progress? My saving grace was that the government declared the new bill was for new applications. I had been approved and the standards with which I had originally applied for Italian Citizenship had been upheld in my case.

Oh there was one last sneaky twist from Salvini in store though. Although it wasn’t included in the bill, Salvini insisted approved applications, had to resubmit background checks before they could take the oath. Only this round we had less time. They were due before the oath ceremony.

My fingerprints were rejected two more times before we shifted to pricey electronic expedited services. We barely got everything back, to get it apostilled, translated and approved by the consulate in time. This is why only three other people became Italian Citizens along with me. The hurdles are intentionally high.

Citizenship in Italy just like it is in America is not something that’s granted simply by getting married. Becoming a dual citizen in today’s political climate takes constant effort for years. You have to want it, badly. I cannot imagine anyone going through what it takes to become a dual citizen without a deep love for the country they pledge an oath to or a deep fear for life in a country they once called home. Gaining dual citizenship takes intelligence, resources, help from others, dedication and money. We would often say to each other “If this is so hard for us, can you imagine how hard it would be for a refugee?”

In our case, this was all going on at the exact same time we were chasing Paolo’s American Citizenship. His story is even more complex than mine. One day, I might share it if I can stand to live through it again. All I’ll say for now is, his path to citizenship was also riff with flights for interviews and tests, background checks and lawyers. The final letter informing Paolo of the date of his citizenship ceremony was only delivered thanks to a friendship with the Postman. Paolo’s name was spelled wrong. The city was spelled wrong. The street number was wrong and the zip code was wrong.

All of this begs two question, why? Why was it so important for us to become dual citizens and why were we worried?

Why Dual Citizenship Is Important

Rights. Citizens have rights that immigrants and legal residents do not. Even though I’m Paolo’s wife, unless we are registered as residents in Italy, I as an American Citizen am not legally allowed to be in Italy for longer than 90 days. At which point, I would have to leave Italy for 90 days before I could legally return. If Paolo’s parents would have needed help before I became an Italian Citizen, we faced being separated for three month periods.

COVID-19 is another more extreme example. If I hadn’t become an Italian Citizen in 2019, I wouldn’t be able to go to Italy with Paolo. If he were to return to Italy to check on his parents, without his American Citizenship, he would not have been able to return. Can you imagine? Without my Italian Citizenship Paolo would have had to make a choice between getting to his parents or staying with his wife during the worst epidemic of our time.

Moving between two countries are not the only rights we were concerned about. Voting, owning property, the right to work, the right to a fair trial. Rights are worth the fight.

Why I’m Proud to Be a Dual Citizen

Italy’s Constitution sets out that all citizens have equal social status and are equal before the law, without regard to their sex, race, language, religion, political opinions, and personal or social conditions. It’s not only our citizenship rights, but the right to believe in what our countries represent that drove us to fight so hard to gain dual citizenships. Democracy, equality and cohesion. This is why Paolo and I both love our countries.

For us this has been especially poignant in a time when our political leaders need us, the citizens to remind them of their responsibilities. They too are beholden to the laws of the land and to the spirit of the constitution that helped form our countries.

Taking an oath to become and Italian Citizen was a deeply personal reminder it isn’t just the job of politicians to uphold democracy, it is every citizen’s responsibility too. Now, I will do so as both an American and an Italian.