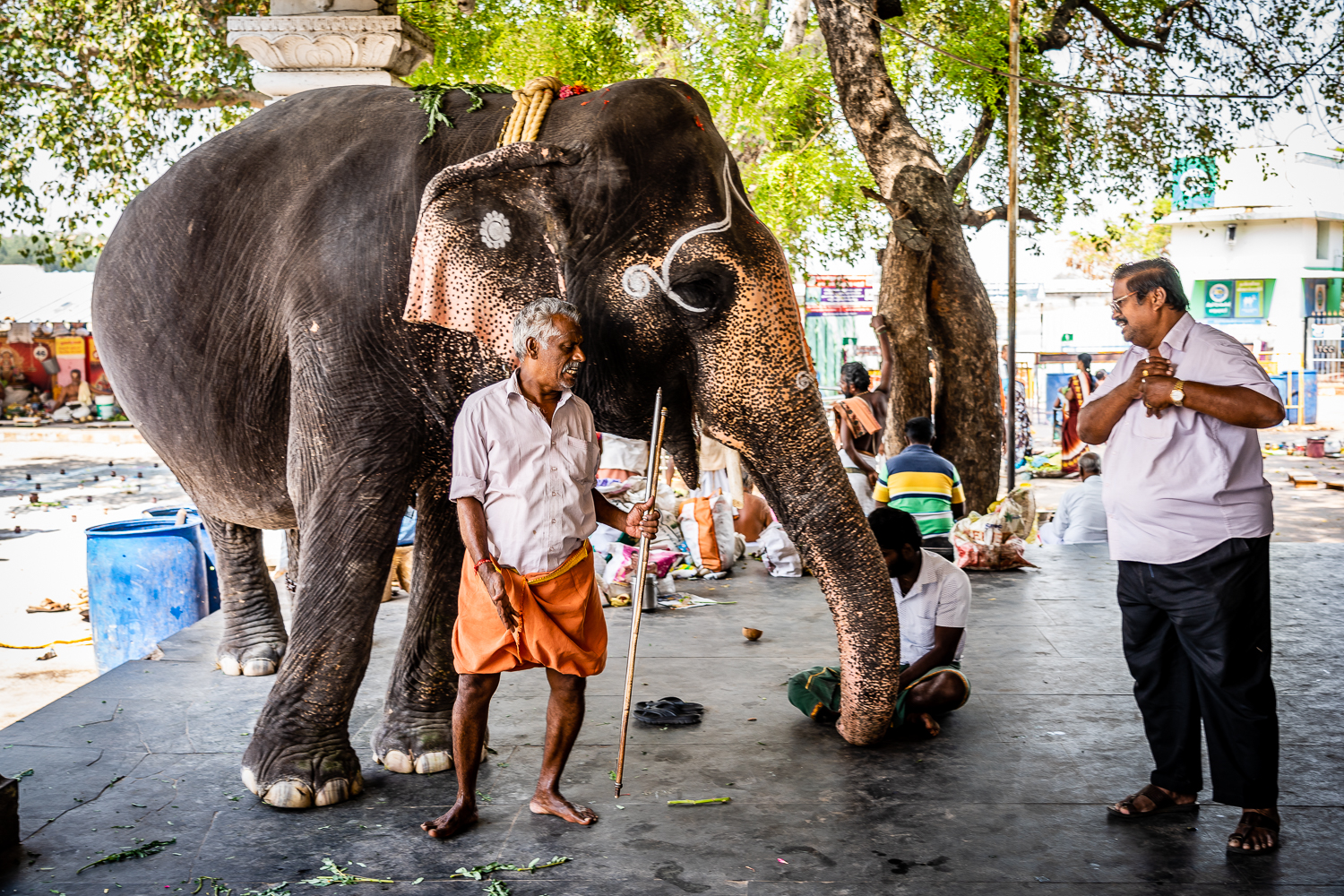 Srirangam (aka Thiruvarangam) is a river island neighborhood in the city of Tiruachirappalli, Tamil Nadu, India. On one side is Kaveri River. On the banks of Kaveri river sits Amma Mandapam Ritual Center and Bathing Ghats. One of my absolute favorite stops on our tour of Southern India.

Our guide had hinted at a special stop before our visit to The Sri Ranganathaswamy Temple. As our tour van pulled up, I could see the brilliantly colored temple off in the distance. Surely that was treat enough right?

Instead of heading right for the temple, we took a detour behind a local market.

Fascinated by the colors of Sarees floating by, I didn’t see the gates or dark tunnel ahead until we were in them. “Where ARE we going?” I thought.

Stepping back into the light, the first thing I saw was an elephant trunk spraying water directly into a woman’s face. Our guide, who had been to Amma Mandapam Ritual Center countless times before burst out laughing. That was all the permission I needed to have a good laugh myself. While I had no desire to trivialize a blessing, we’d been so caught off guard, not reacting instinctively was impossible.

The temple elephant, whom I believe is named Andal is a beautiful animal. Bejeweled and painted his energy seemed happy.

Unfortunately his adorable pink forehead and ears are caused by vitiligo. Pigmentation loss due to a diet lacking proper nutrients. Andal was clearly being given food and happy about it, but my guess is his diet would be the equivalent of my dream diet. Constant chocolate cake and red wine. Delicious but not really good for you.

Stepping further into the space, we realized we were surrounded by mini rituals held by local Brahmin. Some were for departed ancestors. Others for fertility and still others for healing illness. While we didn’t know exactly what was happening in the rituals, there were some noticeable consistencies

Fire, was a constant. An important element in Hindu rituals our guide described fire as the one pure element. Earth, air, wind and water having been polluted by man.

Brahmin were typically paid small amounts or given gifts of fruits and flowers. Some to be used in the ritual itself, some as a gift to the Brahmin. Just in case you need it, my last post about a night Puja goes into more details on who Brahmin are.

Color, color, color. Most Brahmins had small pots of colorful powders used during rituals. Some marked foreheads, some went into the fire and many were mixed together in bowls during the ritual.

The most common element between all the rituals was focus. We tried not to be obtrusive or rude. Paolo even held off taking photos for the first half hour. Our guide noted, people are very focused during Hindu rituals and that it was okay to take pictures if standing a few feet back.

I’m thankful that he did. What Paolo managed to capture was the spirit of the moment. Daily life in Srirangam. Rituals that had been happening for long before we arrived and hopefully long after we left. We were witnesses to the moment that day.

During the rainy season water is flowing through Kaveri river making it a popular bathing ghat. Local worshipers and tourists go for a “sacred dip” before visiting Sri Ranganathaswamy Temple. Easily, the main stop and tourist attraction in Srirangam. Unfortunately our trip in April came before the rainy season. Which meant the Kaveri river was bone dry and mostly abandoned save for stranded trash.

Least I sound disappointed, the main attraction in the Sri Ranganathaswamy temple was just a 15 minute away from Amma Mandapam.

The largest living temple complex in the world Sri Ranganathaswamy is a jewel box of gods. Architecturally astounding and incredibly ornate bright, bold colors decorate each ornate layer of the main tower.

Also known as Thiruvaranga Tirupati, Sri Ranganathaswamy Temple is a UNESCO world heritage site that was developed over centuries with contributions from multiple rulers and dynasties. The temple is dedicated to Ranganatha, a reclining form of Hindu deity, Bhagwan (God or Lord) Vishnu and it’s massive! Constructed in the Dravidian style of architecture, the entire temple complex spans over 156 acres. Imagine a football field. Now imagine 100. Correct me if I’m wrong here but I believe the average football field including end zones is 1.3 acres.

Venerated as a centre of pilgrimage and a unique temple-town, life inside temple walls is equally as spiritual, beautiful and serene as the architecture. The corridors just outside the inner sanctum are cool and shaded. Making them the perfect place to sit and stay a while. Once inside I saw people performing rituals to keep their husbands safe right next to teenagers charging their iPhone in temple outlets. Sri Ranganathaswamy Temple is as astounding to visit as I hope I’ve made it sound.

During my research for the trip, I found plenty of information about Sri Ranganathaswamy Temple. Yet none of it mentioned Amma Mandapam Ritual Center. If while traveling you find people more fascinating than history, then I’ll just leave this right here for you.