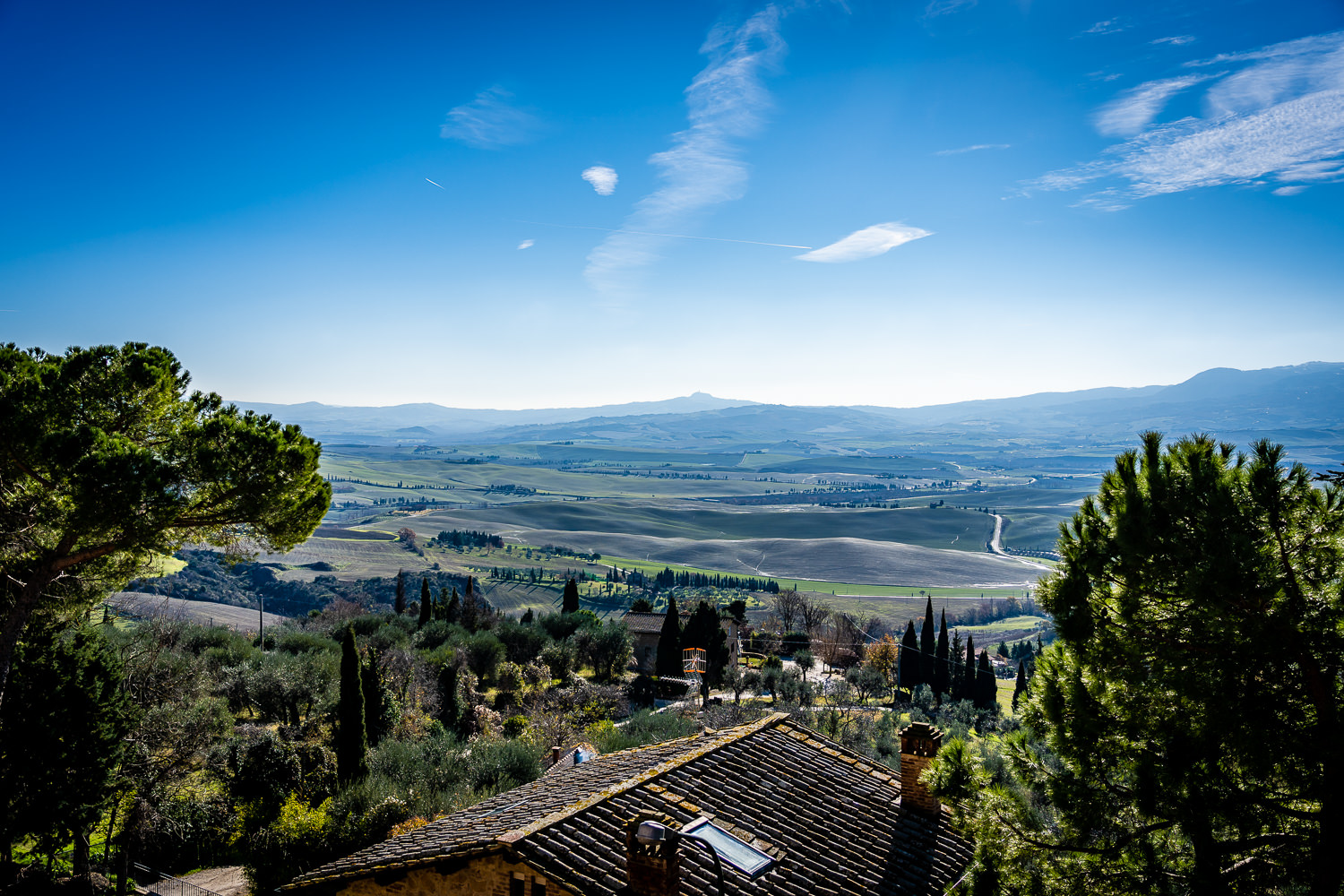 Pienza is famous for cheese & being one of Tuscany's most romantic hilltop towns. Why this UNESCO World Heritage Site should be on your list in 10 Photos.

Last winter, Paolo and I made our way to Pienza, Italy. A hilltop town in Tuscany not far from Siena. Unbeknownst to us, there was a small exhibit in town celebrating the 50th Anniversary of Franco Zeffirelli’s ‘Romeo and Juliet.’

The movie’s score has been etched in my heart since studying ‘Romeo and Juliet’ in film class many, many years ago. Walking across Palazzo Piccolomini, I heard a familiar tune, softly spilling into the square. Isn’t that the theme song from ‘Romeo and Juliet’ I wondered? Curious I followed the music through an open doorway.

As my eyes adjusted to the light, I looked up only to realize I was standing in the middle of one of my favorite movie sets. There in the window was Juliet. Or rather a life sized poster of Olivia Hussey the young actress who played Juliet.

The song met it’s crescendo and I couldn’t help it, I started crying! Franco Zeffirelli’s ‘Romeo and Juliet’ is one of the most beautiful, romantic tributes to young love ever filmed. The exhibit and the emotion it triggered had caught me completely by surprise.

Paolo snapped this photo after our surprise visit to the exhibit. He scored major husband points that day.

While the exhibit might be gone, Pienza will forever remain one of Tuscany’s most romantic hilltop towns.

Why Pienza, Italy Should Be On Your List in 10 Photos

This little well has had more than its 15 minutes of fame thanks to an appearance in both ‘Romeo and Juliet’ and ‘The English Patient’. If you know of another movie I’m missing, please let me know in the comments below!

Without further ado here are 10 Photos that highlight the romantic charms of Pienza, Italy.

Pienza became a UNESCO World Heritage Site in 1996. Nicknamed “the ideal city” and the ‘Renaissance miracle’ Pienza represents near perfect Renaissance town-planning. Why you might ask? In short, Pope Pius II.

Pienza is the birth place of Enea Silvio Piccolomini who later became Pope Pius II. In 1458 Pope Pius II ordered his childhood hometown be transformed into the ultimate symbol of the Italian Renaissance. Over the next three years, Pienza witnessed a rebirth. Evolving from the village formerly known as Corsignano into the ideal Italian Renaissance city of Pienza.

The ancient village square was renamed Piazza Pio II and was changed to a trapezoid shape paved with angular bricks seen in the photos above. Several notable buildings were added during the renovation including Piccolomini Palace, The Borgia Palace and Cattedrale dell’Assunta.

All of which are seen in the opening scenes of ‘Romeo and Juliet.’ Something any film lover will appreciate while wandering the cobble stone streets and almost 40 buildings inside the walled city.

Cheese lovers will think they have died and gone to Pecorino heaven. Pienza is famous for their sheep’s cheese called Pecorino di Pienza. Pienza’s main street Corso Rossellino is lined with houses built by 14th century nobility and more cheese shops than any cheese lover can handle.

Pro tip! If you take a cheese tasting tour in Pienza, make sure not to miss the sotto cenere (under ashes) style pecorino. Look for a gray ash rind. It’s a Pecorino that’s buried and aged under olive branch ashes for at least 4 months. Traditionally, these ashes were gathered from olive branch bond fires set on June 13th in honor of the patron saint and protector Antonio da Padova at the changing of the seasons.

Renaissance architecture brings tourists to Pienza, but I’m pretty sure it’s the Pecorino that brings them back. If just in taste memory alone. Pienza is an unforgettable city thanks to its near perfect urban planning, graceful buildings and charming streets.

As with all of our favorite Italian destinations there is a perfect balance between preservation and the appreciation of time. The patina Italy is known and loved for.

While it’s a small hamlet compared to Florence or Siena, Pienza is a town full of life. Laundry hangs from window lines, cheese shops are inviting and local townspeople stop and talk while crossing the piazza. Because here in Italy, there is always time to say “buongiorno, come va?”

Pienza is one the best examples of what entices tourists to dream of one day retiring in Italy. I mean, can you imagine perching in a window with your morning cup as church bells ring across this view every day?

I’ll never forget our trip to Pienza, Italy courtesy of my Romeo, Paolo. Thank you for unintentionally bringing me to the heart of one of my favorite movies Amore!

New to ALOR.blog? We offer a photo centric way to explore Italian travel destinations. All photos are by professional photographer and dual Italian American citizen Paolo Ferraris. Unless of course he’s in them! In which case, they are taken by me, your host and guide Brandy Shearer.

Like Paolo, I too am a dual American Italian citizen and as of April, an American Expat. Paolo and I moved to Italy in 2020. We hope you’ll join us as we share all the reasons why we love Italy enough to call it home.

We’d love to hear from you! Have dreams of traveling or moving to Italy? Share where to in the comments below.

Follow ALOR.blog for Stories of Traveling & Moving to Italy!