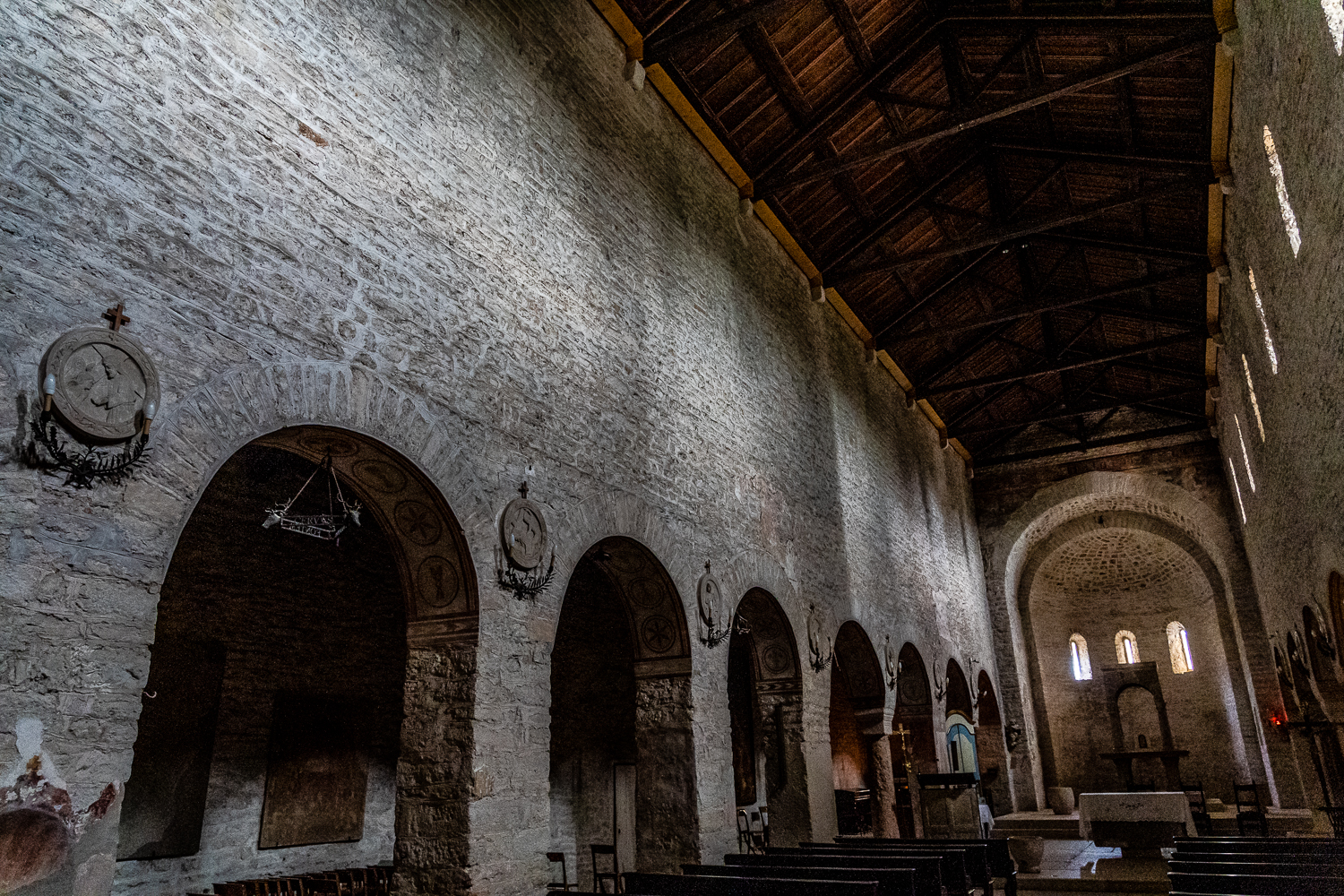 For this week's Italy Pic of the Day, we venture outside Verona into the Valpolicella Wine region stopping at Sant'Ambrogio, San Floriano, and San Giorgio.

Have you ever been alone in a dark church and had the lights suddenly go out? I have and it’s more than a bit unnerving! Especially when it’s a church built on what was once a pagan worship site like The Pieve di San Giorgio di Valpolicella!

Today’s Italy Pic of the Day shares details from inside the church I enjoyed seeing before the lights went out, and a tip of what to do if it ever happens to you.

Dating back to the 7th-8th century, the Parish Church of San Giorgio di Valpolicella is one of the oldest religious sites in Verona. There are few really cool features inside that you really do need the lights to see!

The chapel has three naves (central aisles stretching from the main entrance at the back to the alter) and two apses (semicircular recesses covered with a hemispherical vault.) All constructed in local white limestone.

In the 13th and 14th centuries, the inside of the church got a little color! Frescoes were added to the naves and apses.

On the south nave there is one depicting the Last Supper.

The day of our visit to San Giorgio overcast skies dimmed the natural light coming in from high windows. Having learned The Pieve di San Giorgio was a collegiate church I was standing in the dimly lit space near The Last Supper fresco imagining a chorus of latin murmurs when… the lights went out.

A singular clunk was followed by immediate, intensely silent darkness. I could barely see. Minor panic set in. “Oh no! Had they left and locked us in?” Taking a second for my eyes to adjust I held out my hands, trying to feel my way to the door.

Just as I caught a glimpse of a crack of light through the wooden frame, I heard the clang of Paolo dropping a euro into an offering box in the back corner of the room. The lights snapped back on. My fear was instantly replaced with a snort of laughter.

Apparently the best way to get an offering in an Italian church these days is to connect the lights to an offering box. Who knew!

Tomorrow I’m taking an Italy Pic of the Day break to share a new post in my Stories of Moving to Italy series. This month I spoke Emer, an Irish expat who survived contracting COVID while living in Lombardy the hardest hit region in Italy. Then Friday, I’ll share the hidden reasons why Paolo and I will be doing a complete renovation of our first home together in Italy.

Follow for Pic of the Day & Moving to Italy Stories

Join me on Instagram as I share stories of moving to Italy and show what living in Italy is really like as an American expats. Or stick around right here on ALOR.blog for more Italy Pictures of the Day!

Why the story behind Nuraghi across Sardinia, Italy is still a mystery. See Beautiful Photos of Italy Daily on ALOR | Italy Pic of the Day.

Italy Pic of the Day | Mediterranean Sea View in Sardinia

Photos of the Mediterranean Sea from Sito Archeologico Tharros in Sardinia. See Beautiful Photos of Italy Daily on ALOR | Italy Pic of the Day.

Details on the latest partial lockdown in Italy & a question. How are you?